A Treat at Malahide

May 21, 2019
More delays than the Dart have held up this blog post. From lectures, essays, archive cataloguing, research trips, to driving around Northern Ireland searching for stations, I haven’t had the time to just sit at my computer and do what I enjoy the most: look up stuff on the internet. Let’s get back to our day of exploration heading up to Drogheda, next stop: Malahide.

A real GNR treat, Malahide’s station is polychromatic perfection with the stamp of the company’s engineer in chief, William Hemingway Mills, every-which-way the eye turns. The station building is yellow brick, with red and black brick string courses paralleling across true and semi-arch window and door frames. All single-storey, the various rooms align along the platform in symmetrical cohesion. 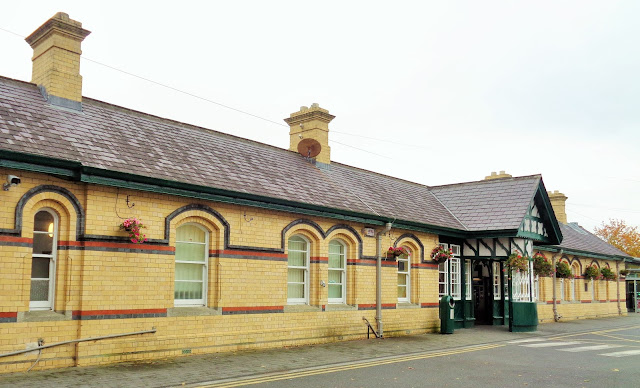 Alighting from my (not delayed) Dart train, my first treat is the original signal cabin located on the western platform. Fenced off with grates on the windows, it’s not particularly alluring, but the moulded bargeboards and supporting roof-buttresses maintain a status of careful aesthetics. The red brick base informs its GNR origin and the rounded square windows echo the glazed screens seen all across the former network. Uniformity in design, down to the last mullioned window-pane. 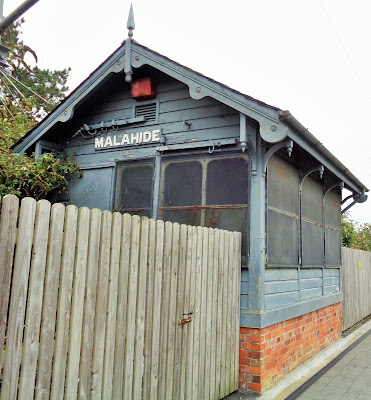 Buildings of Ireland gives a construction date of 1850-60 for the signal cabin. This is incorrect as it is a GNR example: the company was established in 1876 and a drawing for this blueprint design exists for Armagh and is signed and dated by Mills in 1907.

The waiting shelter maintains its original sliding door – this is incredibly rare, as most have been removed, presumably due to wear-and-tear. Also intact are the original windows, with evidence of the original paintwork peekable from the layers of peeling coats. It would appear the concrete base was once the same royal blue as the GNR locomotive livery, with creams, greys and whites all visible underneath the current dark grey and green commotion. 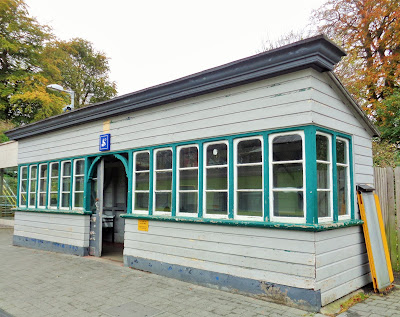 Opposite the shelter the glass-theme continues. The central entrance hall to Malahide station this time demonstrates square-headed window frames, with Regency margin-glazing and another in-tact original sliding door, mirroring the design of the waiting shelter. As we’ll see, this leads to the porch of the station; but I haven’t got there yet. 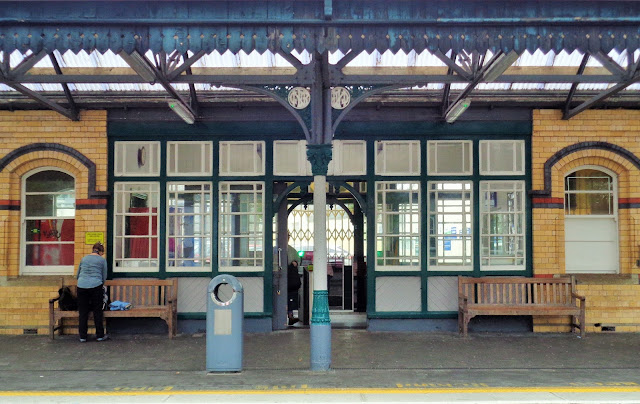 Another GNR antique still in situ is the lattice-girder footbridge and its iron supports. This design was emulated across the network, the floral ornamental bosses covering the central cross-axis of the tie rods also seen in a drawing design for a bridge at Belturbet Junction. Stylised petal cut-outs in the stair-supports perfectly align across the platforms, with hints of green paint glowing beneath the dark grey surface. Unfortunately, but through necessity, the wooden steps and planking have been replaced. 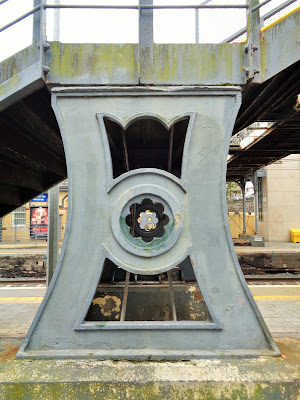 Casts of the GNR letters emblazon the iron spandrels along with Corinthian-inspired capitals, disguising the somewhat mundane function of the iron support column to act as a downpipe with internal guttering. The veranda now has a corrugated-plastic roof which would originally been glass, but still retains the wooden canopy. The entrance hall is now full with electronic ticket barriers, but the preserved full-colour GNR logo above the platform door is a nice touch. 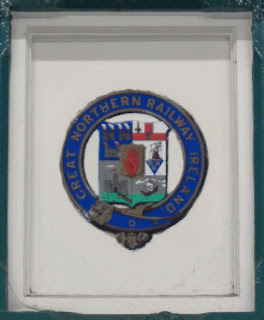 Exiting the station through the diamond-glazed gable-porch I am greeted by the Tudor overstatement that is this trefoiled protrusion which jars completely with its attached becalmed yellow brick station. I find it hard to believe that Mills was responsible for this. Perhaps a local shareholder had delusions of grandeur, or is this part of the earlier station which Mills’ GNR manifestation replaced? 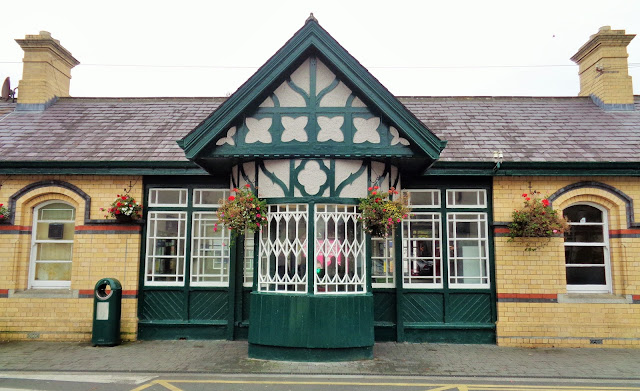 Regrettably, Buildings of Ireland records that Malahide was designed by the architect George Papworth and built in 1851. How can this be, when it is quite clearly a GNR station akin to Dundalk which was designed by Mills, and also that the GNR was established in 1876? Taking the palm of my hand away from my face and returning my eyes from their skyward roll, I discover on Archiseek an intriguing design by Papworth for Malahide, dated… 1851. But it was never built. 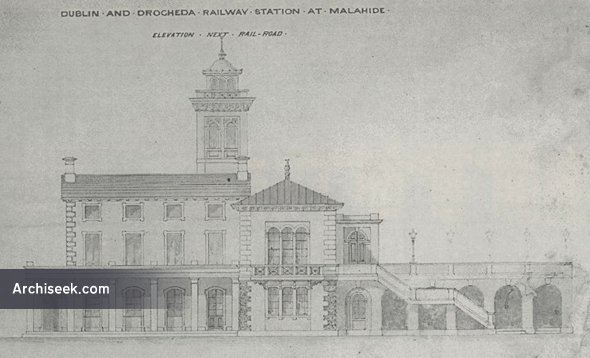 The pomposity of the central tower is quite comical, as is the sheer scale of the building which would be more suited to a terminus station. Indeed, Amiens Street (Connolly) was built in 1846 to designs by William Deane Butler. Was Papworth trying to mimic its Italianate style?

These earlier architects form part of the GNR’s history in that the original railway line which opened in 1844 was constructed by the Dublin and Drogheda Railway, which hired architects for its stations and engineers for its tracks and trains. Papworth did design some of the company’s stations: Drogheda being the most obvious here.

For Malahide, it can be correctly stated here that it is not by Papworth and it was not built in 1851. An original drawing by Mills has not been found yet, but Archiseek dates Malahide station to 1903. This can be verified by the Dictionary of Irish Architects, which lists an entry in the Irish Builder for Malahide station dated 8 October 1903. An entry does exist for Papworth’s design, which was shown at the Royal Hibernian Academy in March 1851 with the caption: ‘intended to have been erected over the line at Malahide’. Alas, it was not.

The legend of Papworth persists at the station master’s house, which is of the standardised red brick and yellow accent variety. A well-kept example, it is now a solicitors. The roles of incorrect cataloguing have been reversed here: Buildings of Ireland lists it as being built c.1880 which is probably correct, whilst Archiseek attributes it to… you guessed it: Papworth in 1851. Sigh. 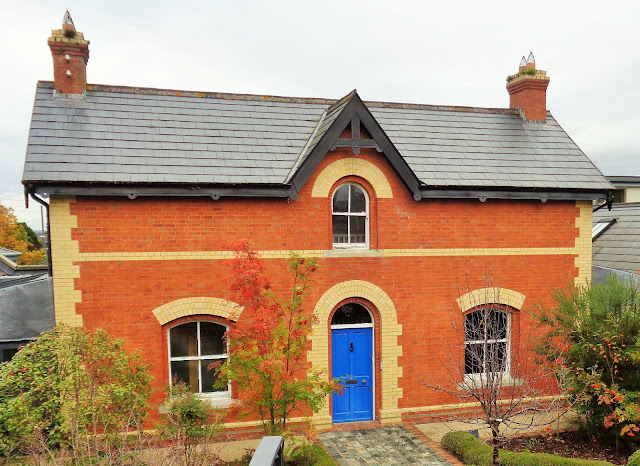 An interesting article appears in the Freemason’s Journal, dated 12 September 1844 – the year the DDR opened – with a call out to architects for designs for the station master’s house at Malahide. The designs are to be sent to the architect of Amiens Street station, William Deane Butler.

The persistence of the 1851 date suggests there must have been some kind of a station building at Malahide before the GNR took over. Two articles from both ends of the social scale illustrate this. The first is a call by Lord Talbot de Malahide (of his eponymous castle) to the public who could avail of free train tickets on Saturday 1 February 1851. The second is the rather less salubrious tale of a drunkard relieving himself on the platform and in the station building with his excuse being there were no facilities at the station. Mills’ design corrects this: Boyles’ Ventilators are evident in the roof at the northern end of the station building; they were always used to air the gentlemen’s toilets.

Still heading north is the Malahide viaduct. Built by the DDR’s chief engineer, John Macneill, and in place by 1843, his timber design was not to last and was replaced in 1860 to designs by another DDR engineer, Marcus Harty. His design had stone piers and iron spans, which were replaced by concrete spans, and again by Irish Rail following another collapse in 2009. The viaduct’s strategic importance is described in a 1922 IRA document, 'Memo suggesting ways to hamper repairwork on Malahide railway bridge', in the Ernie O'Malley Papers, National Library of Ireland.


Continuing my pootle around and about the station I meet a rather large archway which provides access to the western platform. Buildings of Ireland dates it to 1880, but I wonder if this is a remnant of the first railway station and therefore earlier? Why would the GNR built such an archway? 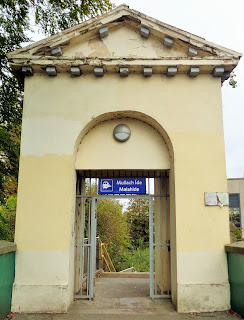 A meander to the eastern side of the station brings me to Railway Avenue. Of course I get overexcited and proclaim (in my head, not out loud, obviously) that these are railway workers’ cottages. A little bit of calmer researching shows that this street is part of old Malahide, formerly part of the St Sylvester’s complex which includes a holy well and pre-date the railway. The name was probably given afterward as it leads around to the front of the station. 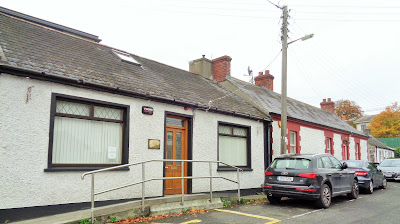 A few wonderful old photographs of Malahide station, its viaduct and surrounds demonstrate its importance as a destination, my two favourites being the construction of the railway tracks (possibly at Malahide viaduct) and the seaside postcard of a dapper gentleman with the caption ‘I am giving the girls a treat at Malahide’.

A long time coming, but a treat indeed.