January 11, 2019
Following festive frolics, a dose of a head cold and a birthday (ugh), it’s time to get back to the good stuff: blog posts! So let’s get back to my day of station-spotting which concluded at Howth.

Dublin’s riviera promised sunshine, a beach, cliffs and overpriced seafood. The perfect end to a perfect day out.

Having only seen the Georgian front of Howth Station (I got the bus here a few months back), my eyes deceived me by delivering me to a Mills-style GNRI station, complete with yellow, red and black bricks, as per my first true love, Dundalk.
But it was not a mirage. Lurking behind tourists I waited for the platform to clear, camera at-hand ready to snap as-empty-a-platform-as-possible on a busy sunny August Bank Holiday Monday. Taking a photo of the somewhat weed-covered brickwork, a tourist-lemming appeared at my elbow with an irritating ‘cer-chik’. You can turn that sound-effect off, y’know. He beamed at me and shrugged before walking off and taking a picture of his shoes. At least someone is odder than I am.
Howth Station opened in 1847, and its original façade remains with a two-storey, lengthy building, with central-stepped entrance and a now-railway bar underneath – probably the original refreshment room – with the platform at first-floor level. The National Inventory of Architectural Heritage and Archiseek states it was built c.1855; both entries detail the GNRI architectural style despite, as we all know, the company being established in 1876 and its chief engineer, William H Mills, responsible for the yellow brickwork. Neither website give an architect. The original Howth Station was probably built in 1855, but the dates for the later GNRI-additions remain undocumented… for now.

The length of the building is notable. Being the end of the line and a tourist destination, it is likely that larger waiting rooms were provided, and being beside the harbour, possibly post and telegraph offices. Indeed, E. M. Patterson informs us that the Dublin and Drogheda Railway Company which built the line (subsumed by the GNRI), offered its first and second-class passengers “a cold bath in the company’s bathing boxes, during the bathing season”. Being on the Irish Sea, I’m not entirely sure which season would entice a cold bath.
The ironwork canopy matches that at Dundalk, also using the integrated supports-as-gutter system. An intriguing mullioned window catches my eye in the modernised ticket-machined entrance hall. It is Gothically ridiculous in this setting, with a Georgian front, Victorian back and Modernist interior, but does mirror those seen at Sutton.

To the right as I exit the station are the arch-remains of the former Howth-Sutton Tramway, whose electricity power station, as we read in the previous post, was built and operated by the GNRI at Sutton. The hammered-stone looks virtually indestructible (although it was, previously spanning the Howth Road), and it is amusing to see that the urge of yellow-brick strong-coursing was impossible to resist. It had to be GNRI brick-branded!
The GNRI stamping continues with the adjoining former station master’s house, now a private residence. It is of the blueprint design also seen at Sutton, Clontarf, Balbriggan and many others. I have not located a drawing for this yet, but I will! NIAH lists it as built c.1870. It is my life mission to find the correct construction dates for all buildings and update all records. Lobbying aside, I cannot resist the urge to stand atop a cement bollard in the block-off car park next to the house. A slow pirouette scans my horizon, a passer-by looking up to see what I can see.
What can I see? It looks like the top of a signal box. This is not listed anywhere, but my handy camera zoom confirms this is the case – it is however completely inaccessible, blocked by a large corrugated-steel industrial unit. I’ll try and get to it later.
Turning back to the road I put my foot out to step down off my viewing-tower when- what is that?! I nearly break a hip, collapsing in intrigue staring at the cream and red quoined, gable-fronted building opposite. It has to be a former station, surely?
Again not a listed building, but maps and histories provide the evidence of the former tramline stopping here, so it is most likely a former tram station. (It’s the lined boxes to the north-east of ‘Aberdelghy’). Does anyone have memories of this? Do the current residents know? 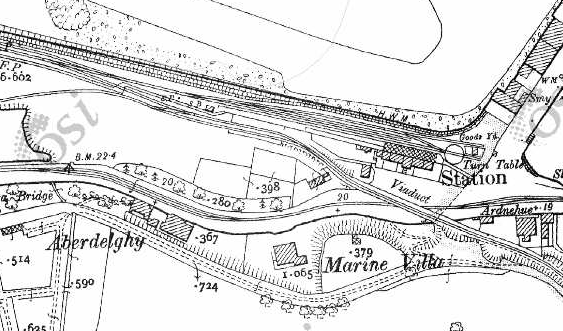 My tummy rumbles, and I decide to suppress my yearning for fish and chips with salt and vinegar Pringles and a wander around to the beach-side of Howth Station. Again, the roof of the signal box taunts me. Clambering on rock sea defences I see it in all its redundant glory: it is the same style cabin as all others along the former GNRI route. My day out on the Howth branch line is complete.
Weeks later I sort through images and amongst archival pictures in my ‘Dundalk’ file I see the words ‘Howth Station’ neatly scribed on an architectural plan. What’s this now? It is the original drawing of the alterations made to Howth Station by the GNRI, and - best of all! - it's signed and dated by Mills, April 21 1888. 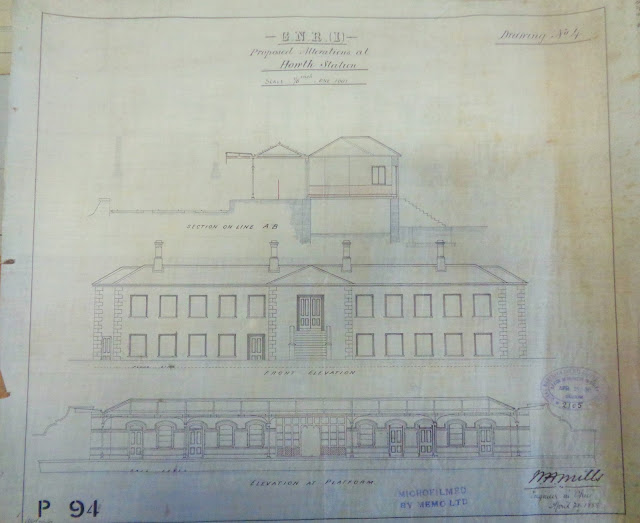 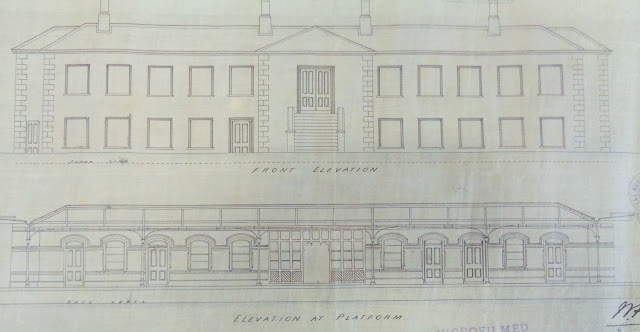 Ladies and gentlemen, we have a date. The canopy and yellow-brick platform additions were approved in 1888, probably built 1889, and one assumes that the station master’s house and signal box were built around the same time. The bridge for the tramline would have been completed later when the lines opened in 1901, its aforementioned yellow-brick line neatly completing the GNRI’s involvement at Howth.

P.S. For those not familiar with ‘Dublish’, the title is a play on the slang for ‘how are you?’ and deadly does not mean lethal, but 'good'.